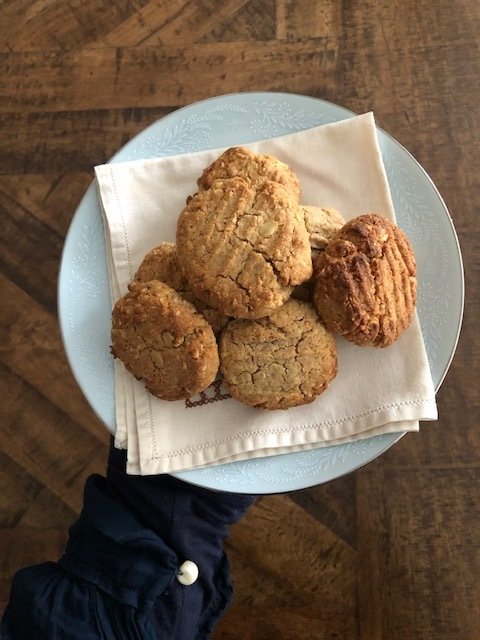 I grew up at a time when every kid in the neighborhood was outside playing, exploring, inventing, creating, climbing. FOMO was real, no-one wanted to miss out on what was happening on the street, and being inside was a waste of time. The neighborhood creek, paddocks, spare blocks,half-built houses and backyards were ours to explore and rule. Sweet freedom to create your own world and reality away from parental supervision for a few hours until that dreaded dinner time yell from the back door.

Of course we needed snacks for our outdoor conquests. The stock standard regular was an oat cookie, always stored in an orange cookie tin that seemed like it had been in our house for ever. I would dash into the house to grab a handful of cookies, but more often than not, I would not want to waste time and just ran out the back door with the entire tin. Why not feed the crowd and share the goodness of wholemeal oat cookies? That was my first memory of sharing food with others. It was a response that didn't involve calculation or forethought of any sort, it was pure spontaneity and joy to just share what I had with the next equal out in the field.

I am guessing that mum got the recipe from our church women's group, where recipes were swapped and shared freely, and it was very basic. I often helped my mum by pressing down on the balls of dough on the baking sheet with a the back of a fork, feeling like I had accomplished something. A small job it might have been, but repeated over and over, it was building layers of confidence, learned with small wins and successes each time. I thank my mother for having the vision to tolerate the mess, the lack of coordination, the over-enthusiasm, the split oats that didn't make it into the bowl. She could see that mess would eventually turn into skill, with lots of practice and patience.

When I bought my own recipe journal after I had moved out of home, and asked mum for my favorite family recipes, this was among the key recipes I asked for. I think it was the memories that I was asking for, really. I have since tweaked the recipe so it works better with my aging self, but the original is included as well, for old time's sake.

Variations; you may wish to replace 1 cup of oats with 1 cup of quinoa flakes. You could use standard brown sugar instead of honey for a sweeter taste. Add your own favorite spices, nuts or chocolate chips for a more indulgent cookie.